Sumter, SC is not immune to the drug abuse epidemic affecting communities all across the United States. In fact, according to recent statistics, drug abuse is a growing problem in the city. Some of the most commonly abused drugs include opioids, methamphetamine, and cocaine.

Sumter, South Carolina, has a moderate drug addiction and abuse problem. According to the Substance Abuse and Mental Health Services Administration, 9.4% of Sumter residents aged 12 or older reported using an illicit drug in the past month, while 17.1% reported binge drinking in the past month. These numbers are slightly above the national averages.

Here we list all of the best opioid rehab facilities and centers, many with exclusive services of their own. Our directory includes a number of services available in Sumter, SC, ready to support you or a loved one lead a safe and clean life, free of alcohol or opioid abuse.

Don’t do it alone – we’re here to help you with admissions.

Sumter, SC is home to several excellent drug and alcohol treatment facilities. If you’re looking for help getting sober, there’s no need to look any further. These facilities offer everything from inpatient and outpatient treatment to therapy and counseling. They also provide a range of services for people with different addiction problems.

If you’re struggling with addiction, don’t hesitate to reach out for help. There’s no shame in admitting that you need help, and there’s no need to suffer in silence. These facilities can help you get your life back on track, and they can help you overcome your addiction once and for all. 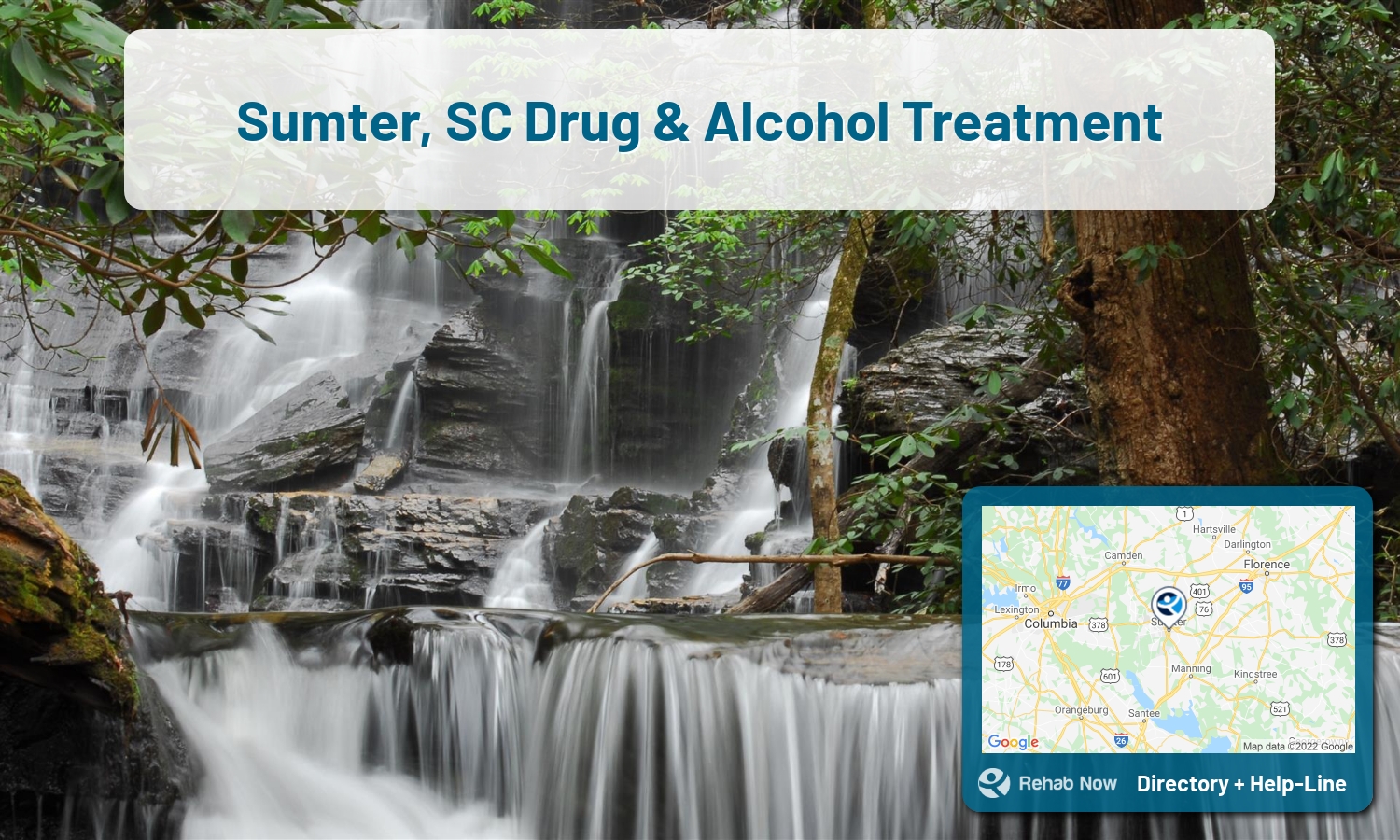 What types of treatment are available in Sumter, South Carolina?

Sumter, SC, the drug treatment process can vary depending on the specific facility. However, most programs will begin with assessing the individual’s addiction and history. This will help the staff create a treatment plan tailored specifically for the person. The plan may include detoxification, individual or group counseling, and aftercare support.

There are several different drug rehab programs available in Sumter, SC. Some facilities focus on specific drugs, such as alcohol or opiates, while others offer a general program. It is important to find the right program for you or your loved one so that you can get the most out of treatment.

According to 2016 data from the South Carolina Department of Alcohol and Other Drug Abuse Services, there were 978 admissions to substance abuse treatment facilities in Sumter County. Of these admissions, 71% were for alcohol abuse, 18% were for cocaine abuse, and 9% were for marijuana abuse.

More than 610,000 of South Carolina residents, or a staggering 11.9% of the state population, uses illicit drugs and another 230,000 residents abuse alcohol every year. A majority of the illegal drugs used and abused are opioids. Marijuana use and underage drinking occur amongst the young residents of this state–though at a lower rate compared to the national average.

How to Choose a Drug Treatment Center in Sumter, SC

There are a few things to keep in mind when looking for a drug treatment center in Sumter, SC. The first is that not all drug treatment centers are created equal. Some facilities have more experience and are better equipped to deal with certain types of addiction than others. It’s important to find a facility with a proven track record of success.

Another thing to consider is the cost of treatment. Not all facilities are equally expensive, but it’s important to find affordable ones without sacrificing quality. Finally, it’s important to make sure that the staff at the treatment center are qualified and experienced.

The first major drug law in Sumter, SC, was the Harrison Narcotics Tax Act of 1914. This federal law regulated and taxed the production, importation, and distribution of narcotics.

The second major drug law in Sumter, SC, was the Controlled Substances Act of 1970. This federal law classified drugs into five schedules based on their potential for abuse and medicinal value.

The third major drug law in Sumter, SC, was the Ryan Haight Online Pharmacy Consumer Protection Act of 2008. This federal law regulated the sale of prescription drugs over the internet.

The fourth major drug law in Sumter, SC, was the Combat Methamphetamine Epidemic Act of 2005. This federal law regulated the sale of over-the-counter cold medicines that could be used to make methamphetamine.

What are some benefits of having a support system after drug rehab?