Get Treatment Options in Stillwater, Oklahoma

Our list provides a variety of resources available in Stillwater, ready to help you or a loved one live a healthy, clean, alcohol-free and opioid-free life. Find out about a facility that suits your needs on our list below, or contact us for individual recommendations.

Discover Treatment Options with an Expert

Gateway to Prevention and Recovery

Information About Substance Abuse and Addiction in Stillwater, OK 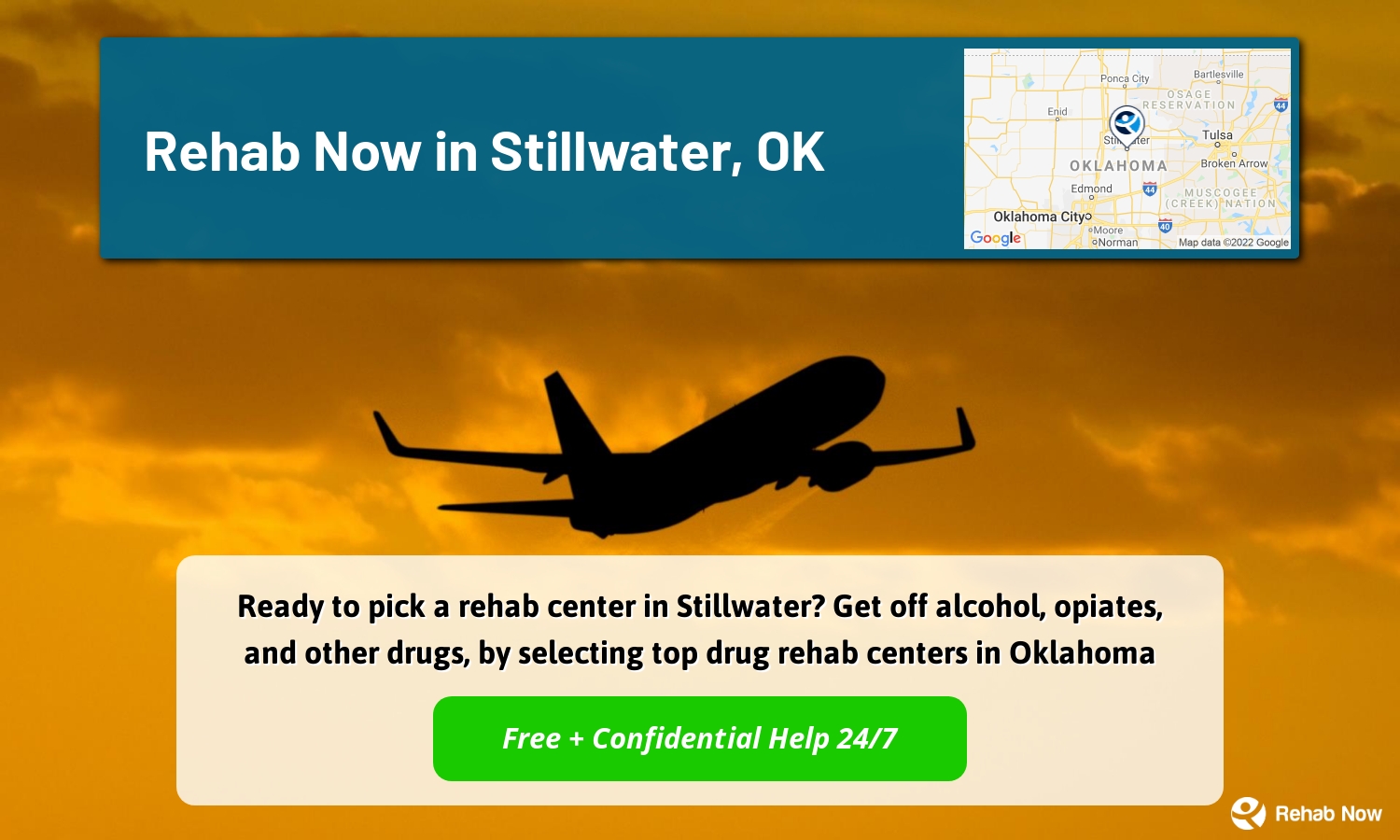 What types of treatment are available in Stillwater, Oklahoma?

There are many different drug rehab programs available in Stillwater, Oklahoma. Some programs focus on inpatient treatment, while others offer outpatient services. There are also a variety of treatment approaches available, including cognitive-behavioral therapy, 12-step programs, and holistic therapies. Ultimately, the best type of treatment for your needs will depend on many factors, including your specific substance use disorder and any co-occurring mental health conditions.

In Stillwater, Oklahoma, life after getting sober can be very different depending on the person. Some people find new hobbies and friends in Alcoholics Anonymous or other 12-step programs, while others may find that their old hobbies and friends are no longer interested. Some people choose to move away from Stillwater altogether, to start fresh someplace new where they have a higher chance of staying sober.

According to the National Institute on Drug Abuse, Oklahoma has one of the highest drug abuse rates in the country. In particular, Oklahoma has a high rate of prescription opioid abuse. In fact, in 2016, there were more than 2,000 opioid-related overdose deaths in Oklahoma. In addition to the opioid epidemic, there are also high binge drinking and marijuana use rates in Oklahoma. According to data from the Centers for Disease Control, over 15% of adults in Oklahoma binge drink regularly, which is significantly higher than the national average. Additionally, 19% of Oklahomans have used marijuana in their lifetime.

The state of Oklahoma ranks second in the United States of America for residents with substance abuse disorders. Since 2004 the state has continuously exceeded the national standard of substance abuse cases. The state spent more than $37 million to combat addiction by investing in quality drug and alcohol addiction treatment in 2017. An estimated 600 to 800 people are on waiting lists each day for inpatient addiction treatment.

There are many comprehensive drug rehabilitation programs in Stillwater, Oklahoma, to help you or your loved one overcome an addiction to drugs. These programs offer a variety of treatments and services, including counseling, medication, and detoxification.

Stillwater, Oklahoma, has some drug rehabilitation programs that offer inpatient and outpatient services. Some programs also offer specializations such as dual diagnosis, which treats addiction and mental health disorders simultaneously.

Which drug addictions are treated at drug treatment centers in Stillwater, OK?

Stillwater has about 46,000 people, so the number of arrests and deaths per capita is much lower than in other cities across the country. However, these statistics are still startling and should be a cause for concern among Stillwater residents.

How Effective Are Drug Rehab Centers in Stillwater, OK?

The effectiveness of drug rehab centers in Stillwater, OK, is difficult to determine. However, some research indicates that most drug rehab programs are effective in helping people stop using drugs and improve their overall health. It is important to find a drug rehab center that fits your needs to get the most out of treatment.

One of the major benefits of going to a drug rehab facility is getting away from your regular environment and social circles. This allows you to focus on your recovery without any distractions or temptations, making it easier to overcome addiction. Some other benefits include:

How do Drug and Alcohol Rehabs help in Stillwater, OK?

Rehab centers help people with addiction problems to overcome their addiction. This can be done through different treatments, such as behavioral therapy, medication, and educational classes. Rehab centers also provide support to people in their recovery process. They may offer group meetings, individual counseling, and other types of support.

What should you expect from your doctor after rehabilitation in Stillwater, Oklahoma?

If you have completed a rehabilitation program in Stillwater, Oklahoma, you should expect to continue seeing your doctor regularly. They will help you adjust to life after rehab and may provide you with medication to help ease any withdrawal symptoms you may experience. Your doctor will also be able to monitor your progress and offer support as you work towards maintaining your sobriety.

How long do drug treatment programs last in Stillwater, OK?

Ready to pick a rehab center in Stillwater? Get off alcohol, opiates, and other drugs, by selecting top drug rehab centers in Oklahoma (888) 674-0062