Pittsburgh is the second largest city in Pennsylvania with a population of over 305,000 people. The history of this city dates back to 1758 when the British commander John Forbes erected Fort Pitt at the site of today’s Point State Park. This place is where three rivers meet: Allegheny River and Monongahela River that form Ohio River. The city is an important industrial, educational and cultural center of the state.

There are many potential causes for alcohol and drug abuse, including genetics and family history, mental health issues such as anxiety and depression, pressure from friends and peers at school and work, and various life events such as abuse, tragedies, stress and other negative experiences.

There is an opportunity for recovery and healthier life in Pittsburgh thanks to numerous drug and alcohol rehabilitation facilities in Pennsylvania. Select a facility that fits your needs in our list below, or call us for individualized suggestions.

Pittsburgh is one of many cities in the United States struggling with heroin abuse. Although heroin use is on a decline throughout the country, it is becoming more prevalent in areas that are close to major ports and borders which includes Pittsburgh.

According to the Pennsylvania Department of Health Emergency Medical Services (EMS), there were 1,424 drug overdose deaths in 2014. This number does not include all of the overdoses that happened outside an emergency room or hospital setting. Of these cases, 675 of the individuals who died had oxycodone in their system at time of death which indicates a possible prescription medication overdose. The rate of drug overdoses has increased by 14% since 2010 and now the leading cause of accidental death in Pennsylvania is drug related.

No matter where you live in Pennsylvania, we are confident there is a drug rehab center that can help you overcome your addiction. We can help you find treatment based on your location, budget, and specific needs and help you get started safely. 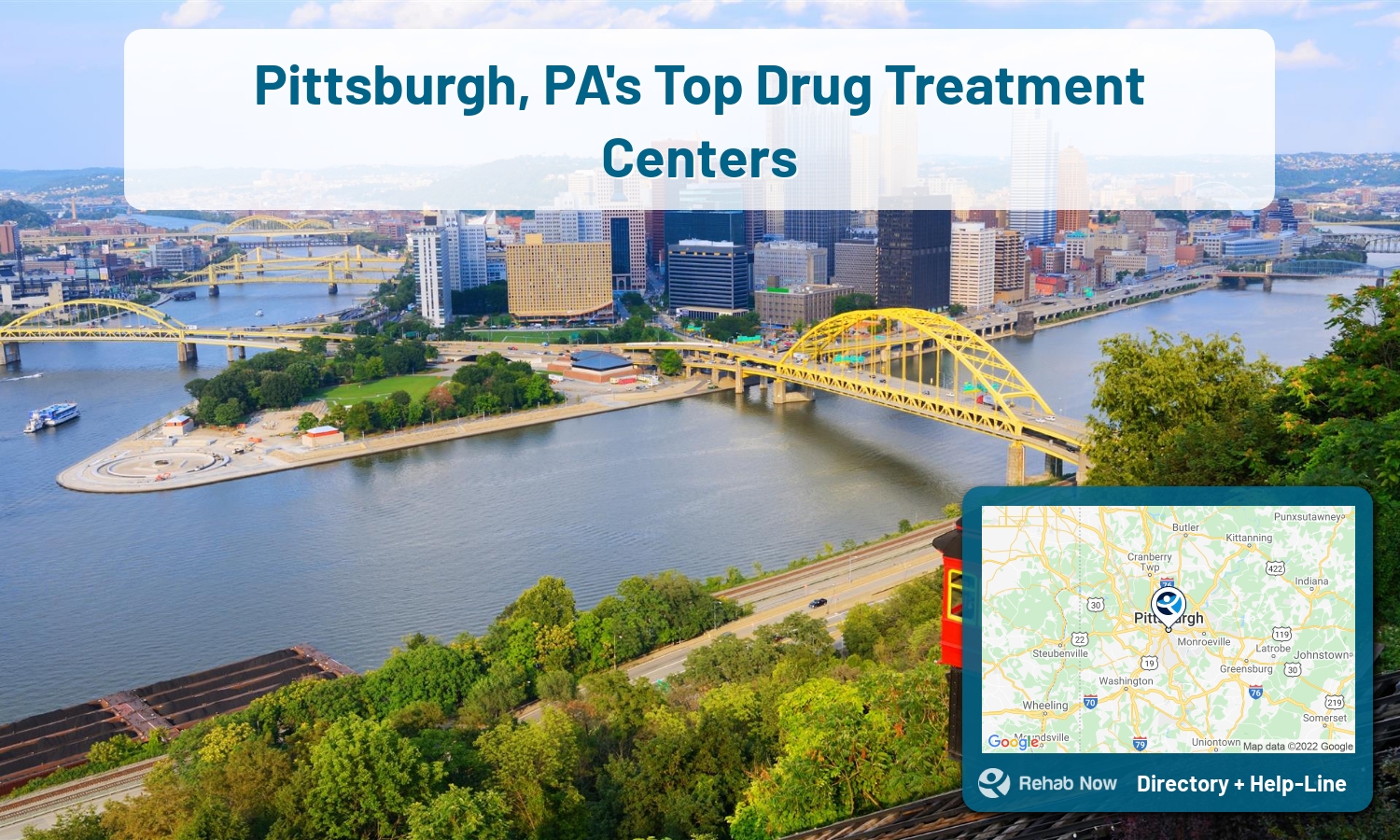 Pennsylvania ranks 14th in the nation for drug-related deaths. More than 10% of all deaths in Pennsylvania have been related to drugs and alcohol. 30% of Pennsylvania youth reportedly drink alcohol monthly, with more than 20,000 teenagers having an alcohol problem. The rate of opioid misuse in Pennsylvania is double the national average.

What types of treatment are available in Pittsburgh, Pennsylvania?

Recovering from any type of substance abuse can be a long process, but it is the most rewarding experience any addicted person will ever go through. After completing the initial detox and withdrawal, you will often be required to engage in a highly comprehensive addiction therapy program. While enrolled in a professional and effective drug rehab in Pittsburgh, the following are some of the treatment services that you can expect to receive:

There are many substances that are addictive in addition to alcohol or drugs. It is difficult to stop using any one addictive substance without treatment. An outpatient drug addiction program will help the addict with the process of withdrawal and provides tools needed for sobriety.

There are tons of outpatient drug addiction programs in Pittsburgh, Pennsylvania. The time period of treatment can vary depending on the individual’s needs and how long they were abusing the substance that is addictive. The kinds of drugs that are most likely to be abused or take over one’s life include heroin, methamphetamine, cocaine , benzodiazepenes (such as Xanax), prescription pain medications, and marijuana. In many instances, a combination of drugs is used. The most common addictions in the United States are to alcohol and tobacco products.

Inpatient addiction treatment can take many forms, including inpatient detoxification, residential rehabilitation and partial hospitalization. Being an inpatient allows a person in early recovery to focus completely on getting well. Inpatient treatment is highly structured, with daily group and individual counseling sessions.

Drug detoxification is the first step that needs to happen if someone is addicted to drugs. This is done with the use of medications that are able to help reduce the withdrawal symptoms. There are many different kinds of detox treatments, but they all work similarly in this regard. The medication available can help people who are withdrawing from drug addiction because it reduces some of the unpleasant effects.

Sometimes, these effects are so bad that people are unable to get through the detox process. This is where many drug users have a relapse. Once they continue the withdrawal process without the drugs, they will be able to start their path to full recovery.

Some of the most common co-occurring disorders are schizophrenia, depression, and bipolar disorder. Most rehab facilities in Pittsburgh provide patients with a dual diagnosis. Dual diagnosis gives rehab the means to treat addiction while restoring mental and emotional health.

Rehab is a combination of detoxing the body, rehabilitation, and recovery. There is therapy, aftercare, and support during the entire process. While substance abuse can take over a person’s life, it is something that can also be overcome with help from professionals at Pennsylvania rehabs.